The Risks of Combining Meth and Fentanyl

Within the past decade, the U.S. public has battled a third wave of the seemingly relentless opioid epidemic. The fully-synthetic opioid, Fentanyl, is considered the main contributor to this third wave; however, the U.S. drug market has also seen an increase in stimulant circulation, specifically methamphetamine, which is partially responsible for the increase in overdose fatalities.

According to the United States Drug Enforcement Administration, methamphetamine and fentanyl were two top contributors to overdose deaths in the United States between May 2019 and May 2020. Both fentanyl and methamphetamine are dangerous when abused on their own, but the combination is often fatal. To understand the potential risk of blending these two substances, it is important to understand their isolated effects on the body.

Methamphetamine, typically referred to as “meth”, is a powerful stimulant and ranks within the top five most addictive, illicit drugs in the world. When used, meth produces a rush of euphoria, increased alertness, increased energy, and feelings of invincibility. Methamphetamine abuse has recently increased due to its affordability in comparison with other stimulants such as cocaine which is more expensive. As a stimulant, meth increases heart rate and blood pressure to dangerous levels.

A fully-synthetic opioid, fentanyl is up to 100 times more potent than morphine. This substance is relatively new compared to other commonly abused substances, with the presence of fentanyl abuse appearing in 2013. As previously stated, fentanyl is the main contributor to the third wave of the ongoing opioid epidemic. When abused, this powerful pain reliever slows the heart rate and causes respiratory depression, often leading to an overdose. According to the Centers for Disease Control and Prevention, synthetic opioids are currently the main driver of drug overdose deaths with 72.9% of opioid-involved overdose deaths involving synthetic opioids, mainly fentanyl.

Due to their oppositional effects on the body, mainly the respiratory and cardiovascular systems, combining these drugs is extremely dangerous and frequently results in fatality. As a stimulant, the presence of methamphetamine in the body postpones the full effects of fentanyl, often convincing the user that they haven’t consumed a lethal amount of the strong opiate. This reinforces the user’s decision to consume more.

The combination of a stimulant (meth) and a depressant (fentanyl) is referred to as “speedballing”. Speedballing combines the two oppositional substances to achieve the pleasurable effects of both drugs while staving off their negative effects. Postponing the negative side effects is only temporary, as the effects of methamphetamine wear off much more rapidly than the effects of fentanyl.

Once the stimulating effect of methamphetamine is absent, respiratory depression sets in. Overdose fatality is often the consequence of speedballing due to this delayed physical response.  As shown in the graph below, the rate of fatality is increasing among psychostimulant users and opioids effectively contribute to the already present danger. 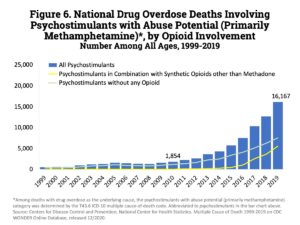 Methamphetamine and fentanyl are both highly addictive and life-threatening when abused on their own and, especially, when combined. That is why it is extremely important to seek help immediately if you or a loved one is struggling with any substance addiction. At Asheville Recovery Center, treatment specialists have developed a unique, hybrid model of treatment which combines a traditional 12-step program with holistic rehabilitation. A multitude of services, programs, and therapies are offered, including the Partial Hospitalization Program, Residential-style treatment, outpatient rehabilitation, and more.

The founders of Asheville Recovery Center, as well as many of our addiction therapists, have struggled with addiction and now enjoy life in recovery. They understand the struggles of addiction and how difficult it is to overcome alone. If you feel that you or a loved one is struggling with drug abuse, our specialists are on standby and ready to help. Call (828)383-0784 and speak with an addiction expert today.