There are risks associated with the use of both alcohol and Ritalin. However, when Ritalin is used as prescribed, there is a limited likelihood of serious side effects. Similarly, if you drink in moderation, you’re unlikely to experience significant problems. When you mix Ritalin and alcohol, there’s an increased chance that you will experience negative effects. To avoid the risks associated with mixing the two substances, seek the help of an addiction treatment professional.

Ritalin is a prescription drug that’s used to treat symptoms relating to attention deficit hyperactivity disorder. The active ingredient is methylphenidate and it’s usually prescribed for daily use. When used with therapy, Ritalin improves an individual’s ability to think clearly, boosts self-esteem and supports social interaction. There are therefore clear benefits to its use. The challenge comes when the drug is abused.

Since Ritalin is a stimulant, it is often abused. It increases focus and alertness, decreases appetite, and causes a feeling of euphoria. When Ritalin is abused, it is usually by people who sourced it illegally. People who have been diagnosed with ADHD rarely abuse the drugs they have been prescribed. Ritalin tends to have a different effect on individuals with ADHD so the urge to abuse the drug is reduced.

That being said, individuals who abuse Ritalin usually get it from friends or relatives who have prescriptions. Some buy the pills while others steal them. Some people even go to doctors and pretend to have ADHD so they can get a prescription. Ritalin can also be procured on the street.

This drug can be used in a variety of ways.  Many people simply swallow the pill as it comes. However, some users crush it into a powder and snort it. When a drug is taken in this way, it gets into the bloodstream faster than if it goes through the digestive system.  Some users also dissolve the pills in water and inject the liquid.

Ritalin abuse is common among teens and young adults who are in school. They believe that the drug will help them to cram for exams or get their papers finished. Despite this belief, research shows that students who prescription stimulants in this manner often perform worse than those who don’t use drugs.

When Ritalin is misused, overdose is possible. Symptoms of Ritalin overdose include:

It is never safe to mix Ritalin and alcohol but people who use Ritalin recreationally often do just that. It is important to note that alcohol is a depressant while as we mentioned before, Ritalin is a stimulant.

Therefore, some people use one substance to counteract the effects of the other. For example, a person who wants to party for an extended period may use Ritalin to ward off the sedative effects of alcohol. However, this may result in overdrinking that leads to alcohol poisoning, especially in people under the age of 21.

It can be hard to predict how the two substances will interact. Sometimes the user’s heartbeat increases to dangerous levels or their blood pressure rises. Mood and sleep can also be negatively affected.

Some people who combine both substances also experience increased anxiety and this can result in additional self-medication. A cycle of drug abuse can begin and it can be very hard to break.

Using alcohol with Ritalin also causes more of the latter to be released into the blood and the user can quickly become physically dependent. This means they are likely to experience uncomfortable withdrawal symptoms when they stop using either Ritalin or alcohol.

Withdrawal can be especially complicated for people addicted to more than one drug so medical supervision is necessary. After detox comes rehabilitation.

If you or a loved one has been mixing Ritalin and alcohol, you need to know that this is considered drug abuse. If you want to avoid the long-term and short-term consequences, you need to reach out to an addiction treatment professional. Contact Asheville Recovery Center to learn about the range of personalized treatment options we offer at our North Carolina facility. 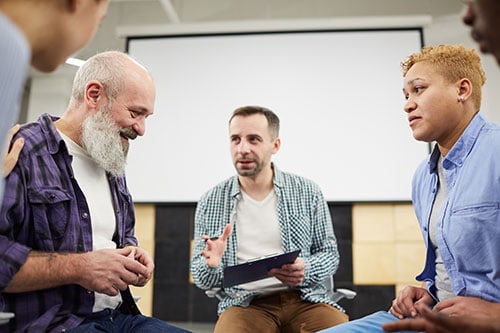 What is SMART Therapy? SMART Recovery was founded in 1992 and stands for Self-Management and Recovery Training. This nonprofit organization promotes abstinence and hosts support