Dangers of Combining Benzos and Opioids

Benzodiazepines and opioids can be harmful and potentially fatal on their own; however, combining these two substances should be avoided at all costs. According to the National Institute on Drug Abuse, 16 percent of overdose deaths involving opioids also involved benzodiazepines in 2016. It is important to understand the chemical makeup of these two substances as it pertains to their interaction.

The first benzodiazepine, Librium, was synthesized in 1955 by chemist Leo Sternbach and premiered as a leading tranquilizer within the medical community. Benzos work by enhancing GABA neurotransmitters, resulting in sedation and muscle relaxation. Common benzodiazepines today are Valium and Xanax, among others, which typically treat anxiety disorders and insomnia.  Although overdose from benzodiazepine use is rare, the drug is associated with an increased risk of suicide and road traffic accidents. When used in conjunction with other substances, specifically opioids, the likeliness of fatal overdose increases dramatically.

Opioids include any substance derived from opium. Opium is one of the oldest-known drugs, dating back to the 4th century BC, and was often used for religious and spiritual purposes.  In 1804, morphine was isolated from opium and became a prominent pain medication throughout the developed world. Opioids provide pain relief by attaching to opioid receptors in the brain. Today, many opioid offshoots exist including Oxycontin which is semi-synthetic, and fentanyl which is 30 times more potent than morphine and fully-synthetic. Unlike benzodiazepines, opioid use can cause a fatal overdose without the involvement of any other substance. 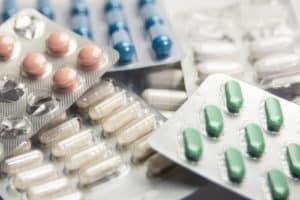 Combining opioids and benzodiazepines is hazardous. The individual side effects of each drug act as sedatives and suppress breathing when blended, while also impairing cognitive function. According to the Food and Drug Administration, when benzodiazepines are combined with other central nervous system (CNS) depressants such as alcoholic drinks or opioids, the potential for toxicity and fatal overdose increases. An alarming statistic was revealed in a recent North Carolina study which indicated the overdose death rate among patients receiving both types of medications was 10 times higher than among those only receiving opioids.

Despite these dangers, concurrent prescriptions have increased in the past decade. A 2017 study involving patients receiving opioid prescriptions between 2001 and 2013 shows that the percentage of persons also prescribed benzodiazepines rose from nine percent in 2001 to 17 percent in 2013. In an attempt to reduce simultaneous prescriptions, the Centers for Disease Control and Prevention issued new guidelines for prescribing these drugs. The CDC recommends that clinicians avoid prescribing benzodiazepines concurrently with opioids whenever possible. Both prescription drugs now include FDA “black box” warnings on the label highlighting the dangers of using these drugs together.

While many people are prescribed these substances in order to regulate health, benzodiazepines and opioids remain very present in the illicit drug world. Similar to heroin or cocaine, individuals can easily purchase Xanax, Oxycontin off the streets without having any formal knowledge of their dangerous interaction. The following graph depicts the past decade’s surge in overdose fatalities that involve an opioid and benzodiazepine combination.

Benzodiazepines and opioids are both highly addictive and life-threatening when abused on their own and, especially, when combined. It is extremely important to seek help immediately if you or a loved one is struggling with any prescription drug addiction.

At Asheville Recovery Center, treatment specialists have developed a unique, hybrid model of treatment which combines a traditional 12-step program with holistic rehabilitation. A multitude of services, programs, and therapies are offered, including the Partial Hospitalization Program, Residential-style treatment, outpatient rehabilitation, and more.

Addiction is difficult to overcome alone. If you feel that you or a loved one is struggling with prescription pill abuse, our specialists are on standby and ready to help. Call (828)383-0784 and speak with an addiction expert today.