Alcohol has been named the most commonly used addictive substance in America. With this being the case, many people struggle with alcohol dependence or abuse. Every year, nearly 90,000 deaths are reported to be the result of heavy alcohol consumption. Alcoholic beverages come in many forms and are sold in most restaurants and grocery stores. This abundance of alcohol makes it imperative to have an in-depth knowledge of alcohol and its effects. Even though the consumption of alcohol is legal, it can cause real issues when done in excess. Negative consequences include alcohol dependence and alcohol addiction.

Alcohol is defined as a colorless, odorless liquid that is made by a process in which sugars in food items are fermented, or broken down, by yeast. For instance, the fermented sugars of grapes are used to make wine. Alcohol is classified as a depressant, although it can have the exact opposite effect on some individuals. The effect often has a lot to do with the amount that has been consumed. For a lot of people, a lower amount of alcohol can cause stimulation to occur, causing the drinker to experience euphoria. A higher dosage of alcohol may then cause the drinker to feel drowsy and begin to lose coordination and bodily control. Alcohol has a physical effect but may also have a psychoactive impact, altering one’s mental processes. This is why someone who has had a little too much to drink might lack the ability to make the best judgments or decisions. When someone drinks often or too much, they may be considered as someone who abuses alcohol. They become dependent on alcohol or experience alcohol addiction. 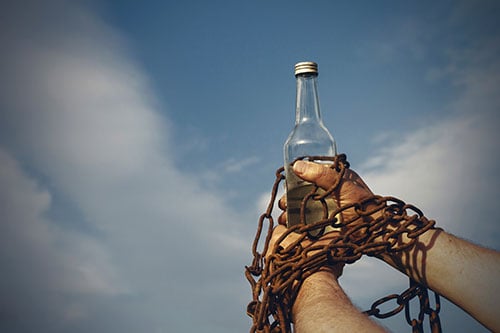 This substance has the ability to alter the brain’s receptors and keep a person from knowing when they’ve had too much. This change in the brain is known as tolerance. As the tolerance level increases, the person will need more alcohol in order to obtain the same feelings which a lower dosage gave them before their tolerance was built. Alcohol dependence is characterized by a compulsive need to drink and an inability to stop once drinking has started. People who have become dependent on alcohol drink more in an attempt to feel “normal.”

Alcohol addiction is said to be a disease that changes the neurochemistry of the brain. Signs and symptoms of addiction include dependence on alcohol, extreme tolerance for the substance, and drinking more often or bigger portions. When a person is addicted to alcohol, they may begin to avoid family and friends or become irresponsible concerning school or work.

Getting Help for Alcohol Addiction or Dependence

Thankfully, there is hope and help for those who are struggling with alcohol addiction or dependence. Asheville Recovery Center can offer a treatment program to help you or a loved one recover from alcohol caused issues. Our specialists are trained to give you the best possible support and guidance as you pursue a life free from alcohol addiction or dependence. Contact us today to begin your journey to recovery